I’m hoping to write quite a lot about Saskia in this blog – to explore and document her journey as toddler/young girl, as well as mine as her parent, as she grows in understanding of what happened to her Daddy and what this means to her.

I am sometimes asked how she has coped with what has happened – the answer has always been that she seems absolutely fine. She was just fourteen months old when Ben died – too young to have any understanding of illness or death. The trips to the hospital every day were just more curious adventures in a life where curious adventure is routine. Daddy was in bed and couldn’t play with her – but this had already been the norm for a while and she was used to it. 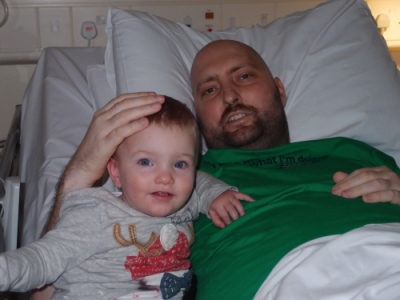 On the morning Ben died I asked my mum-in-law (who had been looking after Sas while I stayed at the hospice) to arrange for one of my friends to pick her up and take her for the day. I assumed she wouldn’t bring her into the hospice and I was shocked when I saw Saskia coming into the room where Ben was. I panicked for a moment – “she shouldn’t see Ben like this” – but something my mum-in-law said (I really don’t remember what it was now – maybe just ‘It’ll be ok’) made me stand aside and let Sas in. She seemed oblivious to the anguish around her – she still got lots of smiles and cuddles, and she just thought Daddy was asleep I guess. She was only there for a little while before my friend arrived to take her back to hers for the day, but I’m glad now that she was there with us. It didn’t mean anything to her at the time but I suspect it will be deeply important to her in future as she comes to terms with it. I feel the same about the fact that she came to the funeral too, even playing a part when she ran up to the front during my speech and then sat in my arms as I finished it.

Life since January has been packed with wonderful times for Saskia. She has seen friends or family practically every day and gone to animal parks, swimming pools, parties and play dates, been camping, been on a trip to America. She has an amazing life, and she enjoys every minute – she seems to be a happy soul by nature.

Of course I’ve watched closely to see how she has reacted to Daddy no longer being here. On the night of 3rd January (the day Ben died), we both spent the first night back at our house for a few weeks. For months previously the bedtime ritual had included a trip into our bedroom to say goodnight to Daddy, but this night I walked straight past the room and into her room. I think she looked expectantly towards our door but otherwise didn’t say anything. I got her dressed, we read some books and then I went to put her down to sleep in her cot. Suddenly she was pointing towards her door (which faces our bedroom door) agitatedly saying ‘Daddy, Daddy’. I had no idea what to do so I think I just said goodnight and left the room – she must have been sleepy as she was soon fast asleep.

I came downstairs and relayed the situation to my parents and in-laws who were spending the evening with me. I think it was my mum-in-law who recalled an interview on Radio 4 that she’d heard just a short while before in which a young woman talked of her father who had died when she was too young to remember. Despite this she felt she had known him all her life and he had played a major part in it, to the extent that she asked herself what he would do when she had to make important decisions. The young woman felt this was because she had grown up around people who talked about him constantly. This story made such a lot of sense and has stayed with me since, inspiring me to keep Ben alive in our household by talking about him as much as I can. From that night onwards the evening ritual included a trip into our bedroom to look at the photos of Ben from our wedding and say goodnight to him. More recently we have photos in her room  so now we look at those.  She has accepted this change so easily (she’s still so innocent I suppose), which is a blessing, but also very sad.

There was just one incident when I wondered if she’d begun to understand. She’d sat down to watch a new DVD – ‘The Hungry Caterpillar and Other Stories’. A story about a little girl who wanted the moon and asked her father to get it for her had just started when I wondered off into the kitchen. A little while later Saskia came running to me, really upset, shouting ‘Daddy gone!’. For a moment I froze on the spot, my heart in my mouth, then I went back to the TV with her and cuddled her while watching the father come back from the sky with the moon for his daughter. Sas was too young to talk about her feelings (still is) so I had no idea whether it was just the story that had frightened her or something more. It certainly cut through me – I needed that cuddle as much as she did.

These days it’s hard to know exactly what ‘Daddy’ means to Sas. She knows who her Daddy is – the one in the pictures, that maybe (I hope) she still has memories of. And she knows other people’s daddies, and daddies in stories. When she plays ‘families’ with her toys, there’s usually a daddy there too. I am so curious to know what is in her head. I guess soon enough she’ll be able to tell me, and that’s when the real challenges of trying to explain where Daddy has gone will start. I think about this a lot and play out the conversation in my mind as I imagine it might happen. But I know she’ll probably come from left field, when I’m least expecting it, and I’ll be lost for words and make a hash of it. There will be much more to write on this theme…