As I said in yesterday’s post, I’ve been on a bit of a spending spree lately – curious to find out more about the books that are available and to find one that fits with the conversations that Saskia and I (and her young friends and their parents) have been having lately about Ben. And I’ve discovered some amazing books – some heart-breaking, some bizarre, some practical, some metaphorical.

Though none is a perfect fit for where Saskia is right now, and our own unique situation, I envisage that all will work as useful resources at some stage, even if it’s just a page here or a bit of dialogue there. So here’s a bit more about the ones I’ve got so far…

1. When Dinosaurs Die: A Guide to Understanding Death by Laurie Krasny Brown and Marc Brown

This is a non-fiction book with page headings such as ‘What Does Alive Mean?’ and ‘Why Does Someone Die?’, and is all told in cartoon-strip style by a host of unusual looking dinosaurs (not like any I learned about at school). It deals with everything from reasons for death, to feelings about it, different ideas about what happens after life, and ways of saying goodbye. Its target audience is obviously older than Saskia as a three year old, and there are parts that are too sophisticated that I would skip over, but in general its pragmatism is a really good fit for the very literal kind of questions that Saskia, and her friends, tend to ask. Also, with its non-fiction format, it isn’t as emotionally charged as some of the story books – which can be saving grace sometimes.

2. Is Daddy Coming Back In A Minute? by Elke and Alex Barber, illustrated by Anna Jarvis

This is one of the heart-breakers, as you can probably gather from the title. It’s a richly-illustrated picture book, with real life dialogue between Elke and her three-year old son Alex after the sudden death of his father from a heart attack. The latter half of  the book will be particularly valuable to us, as Alex asks Elke questions such as ‘Mummy, will you have to die?’ and ‘Who will look after me when you die Mummy?’ and she gives wonderfully vivid, easy to understand explanations, using pictures and nature to show what she means. I can definitely see myself turning to this as a reference book for inspiration on how to answer these tricky questions.

3. What Happened to Daddy’s Body? by Elke and Alex Barber, illustrated by Anna Jarvis

This is the Barber’s second book, and is again based on real conversations between Elke and Alex, this time about his Daddy’s cremation and the spreading of his ashes. There’s also a part where Alex asks about burial and Elke gives an explanation that I think I should memorise it’s so good! Amidst Jarvis’ gorgeous illustration of autumn woodland, Elke’s words compare the dead leaves that turn into soil and feed the ground to what happens to a buried body – ‘Wow’ says Alex. ‘That’s really cool.’

4. The Paper Dolls by Julia Donaldson and Rebecca Cobb
This book will delight you then with the turn of a page completely take your breath away. The dancing rhythm of the words and childish simplicity of the pictures belie the rich and poignant subtext of loss, memory and regeneration that suddenly come into the story. Though the impact of this subtext is powerful to adults, for very young children it is so subtle that most would be unaware of it. At three, Saskia loves the book simply for its music, humour and imagination. As she gets older, its beautiful and positive messages will no doubt begin to sink in and move her as they do me. 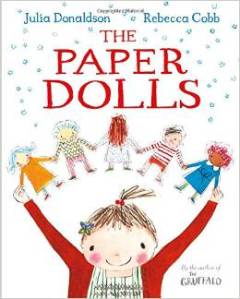 5. Missing Mummy: A book about bereavement by Rebecca Cobb

In this book, the illustrator of The Paper Dolls, Rebbecca Cobb, is both illustrator and writer. Told in first person by a young child (helpfully the gender is not explicit so we say she’s a girl) whose Mummy has died, the story deftly tells of her confused feelings about her Mummy’s death and then of how, through talks with her Daddy, she comes to understand more of what has happened and what her feelings mean. This book has worked out well for us and for a few weeks Saskia chose it every night as one of her bedtime reading books. The reason I like it is that it has a very light touch, the minimal text only glancing over the different emotions and themes. This makes it easier to weave our own story into it, and skip over less relevant parts and draw out and explore more relevant ones. Don’t get me wrong though – its lack of detail doesn’t mean lack of depth  – it’s simple text and pictures cut right to the heart.

First published in 1982, this is the oldest of  the books I have. It’s an allegorical tale about a colony of water bugs who wonder what happens to their friends when they disappear above the water, never to return. They promise to come back to tell if it happens to them, but when one of them finds himself climbing up the lily stalk and transformed into a dragonfly, he realises that he cannot go back below the water any more. Instead, he flies away on the breeze, knowing that his friends will discover the truth for themselves one day. It’s a lovely way of painting the afterlife, and one that can be adapted to any creed. The big drawback, however, is that the small and delicate water colour illustrations are not like the large and engaging pictures that modern children are used to in their books. It’s certainly not a book that will catch Saskia’s eye, but then it’s an easy story to remember and retell so can stand alone without the book itself.

7. Always and Forever by Debi Gliori and Alan Durant

Always and Forever is about a group of woodland animals whose friend, Fox, gets ill and dies. After a long period when they lock themselves away with their sadness, a visit from another friend, Squirrel, helps them to start celebrating their friend’s life rather than just commiserating his loss. It ends with them talking about how Fox will live on in their hearts and memories forever. This would be a lovely book for children who are suffering grief and seeing their families go through it, helping them to see ways back to happiness, and to know that it is ok to feel happy.

8. Duck, Death and the Tulip by Wolf Erlbruch

This is a bizarre one and takes some getting used to. The two characters are Duck and yes…Death – no scythe or black hood, but he is a skeleton in a dress, and therefore not at all the kind of character most Brits would be comfortable with in a children’s book. I say Brits because Erlbruch is German – I don’t know much about German culture but perhaps it’s a more common sight in their children’s literature. I’m fascinated by its unconventionality, and my slightly appalled gut reaction to it. I also feel an affinity with its message that death is always with us, a part of life that we should not fear. I read it to Saskia once – she quite liked it, and asked for a second reading. It certainly didn’t spook her. But I think it’s too old for her in general – the colours are too washed out and spartan, the themes too abstract to appeal to her at this age. Maybe when she’s older – although she might be as weirded out as I am by it by then!

So that’s the lot – a collection that I hope will be useful to us both going forward – and maybe to friends and family too as they face the little darlings’ tough questions. If you’ve read any of these books, or any others, and have any comments to add, I’d love to hear them.

3 thoughts on “‘When Dinosaurs Die’ and other tales: Eight children’s books about death and bereavement”