On Sunday afternoon we met up with Lizzie, Liam and the boys down at the creek. As soon as Saskia saw Liam, the first thing she said was ‘My Daddy’s in heaven’ – she’s saying this a LOT at the moment as you may have gathered! Funny though, that she should do this again having greeted him the exact same way a week ago. The need to talk about where her own Daddy is when she meets her friends’ Daddies seems really strong at the moment.

Or even just the mention of Daddies, will set her off, telling whoever’s listening all about her own. Just yesterday, she was telling her friend Emmeline all about how he was poorly and so he had to go to heaven. She got a bit confused at one stage saying it was because he was old, but overall she’s very keen and confident about talking about him, which I’m really proud of.

Having said that, ‘my Daddy’s in heaven’ can be a bit of a conversation killer, especially with adults who are tongue-tied by cultural taboos and anxiety about what’s ok to say and what’s not.  And even if you are quite at ease talking about it, it’s not always appropriate in that moment. I sense both Liam and I were searching around for the next thing to say on Sunday after Saskia’s challenging opening gambit! As it was, I think one of the boys joined us and turned the conversations to pumpkins, or boats maybe, but not wanting to ignore Saskia’s comment, what would have been the right thing to say if we had carried on the conversation? I’ve been thinking about it since and realised that the thing to do isn’t to be stumped by the subject of death, but to steer the talk towards Ben’s life instead, encourage her to talk about what she knows: his name; who his parents, sister, friends were; Pickle, his cat; his love of the sea and surfing…

I do already try to do this whenever opportunities arise. Ben’s things around the house are ideal starting points for me to tell Saskia about things he liked, his character and his experiences in life. In our bathroom there’s a picture of a surfer, and an old surf board that Ben’s school buddy and surfing mentor, Dave, gave to him. Quite a few times Saskia has asked me about them and it’s been a lovely opportunity to talk about how Ben loved surfing, took me surfing, and latterly fantasised about living his surfing ambitions vicariously through her. To be honest, I was never a fan of the photo or the surfboard as additions to our bathroom decor, and put up with them under sufferance. But now they’re there to stay – partly because of the way they bring Ben into the room and generate memories for me, and stories about her Daddy for Saskia, but mostly because Saskia thinks the super buff surfer ripping up the waves is actually Ben, and I couldn’t possibly disillusion her! 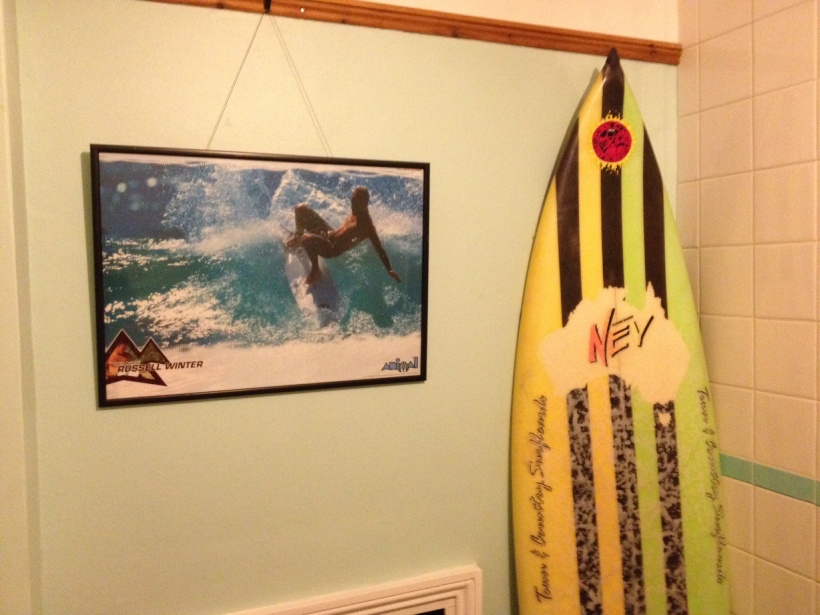